The Bank of England has voted to raise interest rates by 0.5 percentage points to 1.75% as the UK battles to prevent inflation running out of control. We look at what that means for your finances. So what does it mean for mortgages? It depends what type of deal you […]

The Bank of England has voted to raise interest rates by 0.5 percentage points to 1.75% as the UK battles to prevent inflation running out of control. We look at what that means for your finances.

So what does it mean for mortgages?

It depends what type of deal you are on. Most borrowers are on fixed-rate mortgages, and so for the time being at least they are insulated from the impact of the latest interest rate rise.

However, the banking body UK Finance says about 21% of households are on a variable rate – either a tracker mortgage, where the rate you pay is explicitly linked to the Bank base rate, or their lender’s standard variable rate (SVR).

About 800,000 borrowers have a tracker mortgage, while approximately 1.1 million are on an SVR.

With SVRs, things are less straightforward: these can change at the lender’s discretion, but many people will probably see an increase in their monthly costs. However, banks and building societies are likely to come under pressure to either pass on none of the latest increase, or only a proportion of it, to their SVR borrowers. Some lenders may not immediately declare their intentions, or may say that any increase won’t take effect for perhaps a few weeks or more.

So people on fixed-rate mortgages don’t have to worry?

Some with fixed-rate deals that are due to end later this year or early next are likely to be very worried – mainly because the price of new fixed-rate mortgages has shot up during the last few months.

Overall in the UK there are just under 9m residential mortgages outstanding, of which 75% are on a fixed rate, according to UK Finance.

In total, about 1.3m fixed-rate mortgage deals are scheduled to end during 2022, though of course that includes a number that have expired since January, and where in many cases a new deal will have already been taken out.

During the past few years the vast majority of people taking out a mortgage have been opting to fix their payments, mainly because fixed rates have been so competitive, but more recently in order to seek protection from rising interest rates.

“Everyone’s been fixing for years,” said David Hollingworth, an associate director at the broker firm L&C Mortgages. He estimated the proportion of clients who had been opting for a fix at 90-95%.

Two- and five-year deals are traditionally the most popular, while there has been an increase in demand for 10-year fixes, so some people will be protected from rising interest rates for some time, but those whose deals are ending very soon may be in for a shock.

An analysis by L&C Mortgages found the average lowest two- and five-year fixed rates were 3.46% and 3.5% respectively. That’s up sharply on January when the figures were 1.34% and 1.55%.

That means a borrower taking out a £150,000 repayment mortgage over 25 years at the current average two-year rate would face monthly payments that are £159 higher than those paid by someone who signed up for an equivalent deal in January. Over a year that adds up to an extra £1,908.

What about first-time buyers?

They have been very much impacted by the issue of pricier deals outlined above. On top of that, house prices have continued their relentless march upwards: on Tuesday, Nationwide said the annual rate of property price growth had accelerated to 11%.

Data by the property website Rightmove says the combination of more expensive mortgage deals and rising house prices mean the average monthly home loan payment for a new first-time buyer is £976 a month. That is 20% higher than in January when it was £813 a month. If the 0.5% interest rate rise is reflected in the pricing of new fixed deals, that would push up the monthly payment figure to £1,030.

What about those having difficulty paying their mortgage?

The most recent UK Finance data, which goes up to the end of March, presents a mixed picture.

The total number of customers in arrears with their mortgages continued to fall in the first quarter of this year. At the end of March there were 75,670 homeowner mortgages in arrears to the tune of of 2.5% or more of the outstanding loan. That compares with 79,620 in the last three months of 2021, and 84,010 in the first three months of last year.

But at the same time repossessions have gone up: 580 homeowner mortgaged properties and 370 buy-to-let properties were taken into possession in the first three months of this year, up from 390 and 320 in the previous quarter.

However, UK Finance said repossessions had been “rising from a low base” as courts continued to work through a backlog of cases that built up during the pandemic as a result of a possession moratorium that ran from March 2020 until April 2021. In the first three months of 2019, almost 1,400 homeowner-mortgaged properties were taken into possession.

During the pandemic, millions of mortgage, credit card and personal loan borrowers were granted payment holidays, which helped some people who were struggling.

The banking body said lenders were continuing to provide tailored forbearance and support to borrowers who needed help.

Most personal loans are taken on fixed rates, as is most car financing, so if you have unsecured borrowing, you should continue to repay it as agreed.

Credit card rates are variable but not typically explicitly linked to the base rate, so will not automatically go up, although they have been increasing in recent months.

The cost of living crisis is forcing people to put more on credit cards and take out loans to pay their bills, according to Laura Suter, the head of personal finance at the investment firm AJ Bell.

Bank of England data issued last week showed that people borrowed an additional £1.8bn in consumer credit in June. Households loaded an extra £1bn on their credit cards, with another £800m on car dealership finance, personal loans and other forms of credit.

But it’s good news for savers, isn’t it?

Savers were the losers from years of interest rate cuts, and are now finally seeing savings rates climb. Last month NS&I (National Savings & Investments) upped the interest rates on many of its products.

In response to previous base rate increases, account providers have boosted some rates, although often not in line with the Bank’s move.

But even if the latest increase is passed on in full, rising inflation – currently 9.4% and set to go higher – is eroding the value of people’s nest-egg cash.

Meanwhile, annuities – the products offering a guaranteed income for life in exchange for a lump sum – have become better value as interest rates have risen, and are likely to improve again.

The housing market has been fuelled by cheap mortgages, so increases in the cost of borrowing are likely to have an impact.

Nationwide said this week that while there were tentative signs of a slowdown in activity, with a dip in the number of mortgage approvals for house purchases in June, this had yet to feed through to price growth. But this could start to change.

At the same time, a key mortgage affordability test was scrapped by the Bank of England this week, which may mean that thousands of potential homebuyers are able to get a bigger home loan. Making it easier for some people to get on to the property ladder could give the housing market a fillip.

Sun Aug 7 , 2022
kate_sept2004 / Getty Visuals Moms are in a exclusive placement when it will come to operate, simply because a lot of of them are the most important caregiver for their youngsters, or the human being in demand of figuring out their family’s child care scenario. See Our Checklist: 100 Most […] 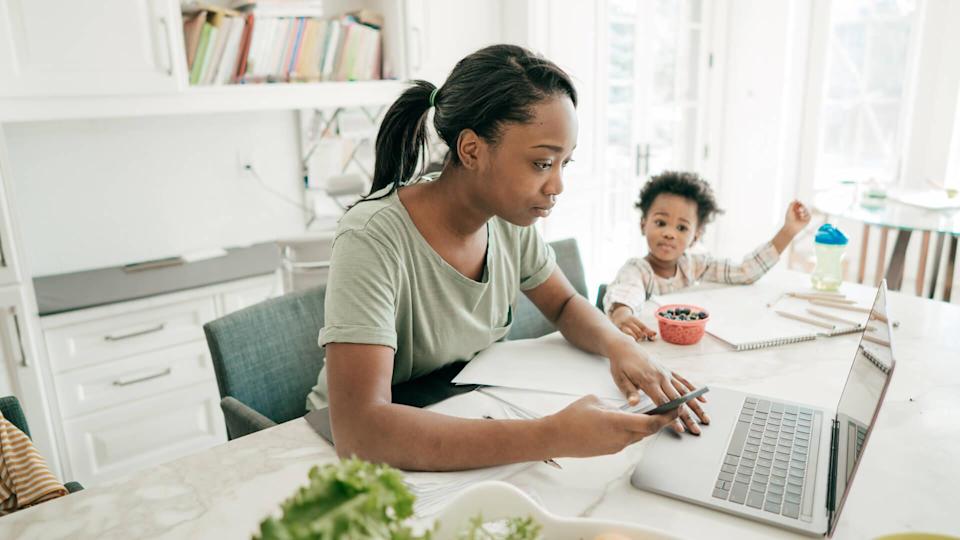